When I first started knitting faces using Katarina Breiditis’ face pattern, my plan was to knit a few faces as practice for a more complicated conceptual piece, in order to learn the structure of the features and use the structure as a jumping-off-point for my own adaptations. Then I would join the practice pieces together and give it to my 2-year-old granddaughter as a blanket or a plaything. But there are about 100 steps in the pattern, and I made face after face without feeling I had attained such a deep understanding of its structure that I could launch myself from the pattern and fly off my own. So for 16 faces, I sat at my desktop, yarn and needles in hand, with the pattern enlarged and each line of the pattern highlighted as I knitted it so as not to get lost.

The first face came out creepy but cute. It had big bulging eyes, a little piggy nose, and an enormous lopsided mouth. My daughter, in her final months of medical school, diagnosed it as having a thyroid condition and a bad reaction to a medication. I played up its creepiness by embroidering its eyes in a crazed orange spiral. Subsequent faces came out more accurately, according to the pattern, but no matter how precisely I stuck to the pattern, each face came out different from the others. The actions that produced distinctly different personalities and features were trivial variations in how I put my needle into any given stitch to do the folds of the mouth or the eyes, or maybe I was off by a stitch in centering the nose, or maybe I miscounted something and did an extra short row or two, some extremely minor variation in execution that added a unique nuance to the face.

Eventually I came to understand the pattern well enough to introduce my own intentional modifications to the pattern, deepening the eyelid by doubling the number of rows given in the pattern above the eyeball and lengthening the nose by knitting an extra set of short rows. The final outcome was nevertheless always a surprise because of those tiny things that make a personality’s worth of difference. We humans, as social animals, have evolved to give significant meaning to the angle of an eyebrow or the upturn or downturn of the corner of the mouth, a line between the eyebrows, some asymmetry between one side of a feature and the other. Random changes in tension can tighten one stitch and open another when a knitter is following a pattern as precisely as possible and then something random happens. That’s when the Fiber Goddess comes and improves my work.

I began to think of the pattern as if it were the genetic code that every human face is built on. On the biological level, the differences in DNA between ethnicities is negligible, and within families, the difference is close to nonexistent. That made me start thinking about the differences and similarities in the faces of my own family, such as my mother and her older sister Henrietta, who as they aged became almost identical. The only difference in their faces came from their personalities. My mother’s personality was more assertive, even aggressive, while Henrietta tended toward anxiety.

For purposes of comparison, here’s Henrietta with her daughter (back row, second from left) and my four sisters and me. Not all of the chins are visible, but we all have the same chin. 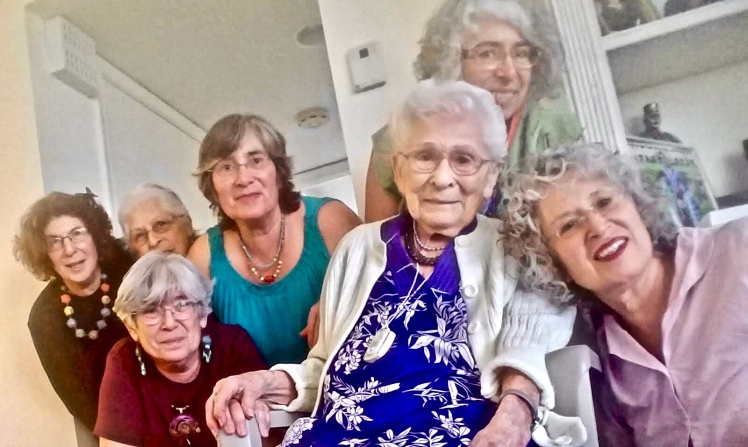 I kept making face after face because I never felt as if I understood the pattern well enough to make them without consulting the pattern before every step, and each time I finished a face, I pinned it to my blocking tiles. After making around six faces, I began to think that this wasn’t going to be a baby blanket or a toddler’s plaything, and that my granddaughter’s two-year-old fingers didn’t belong up their nostrils.

The orange one is the one in which I first adapted the pattern to produce a more articulated eyelid. The blue variegated one is the first one with a modification to lengthen the nose. 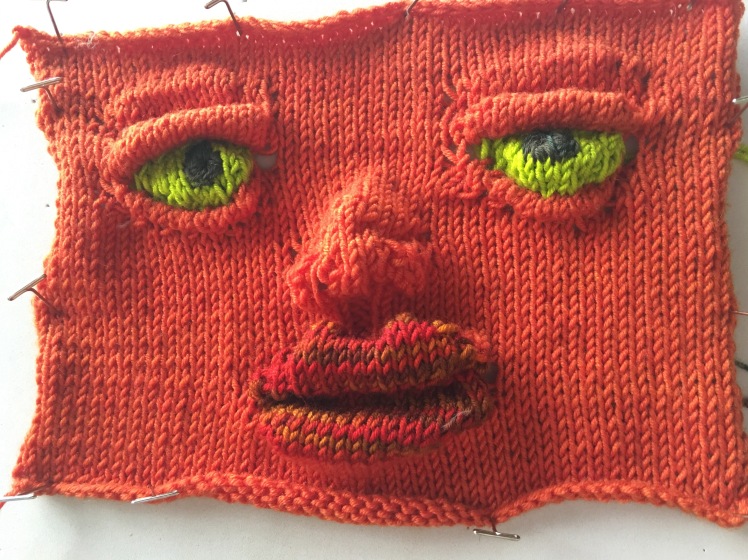 This is the face that made me start taking this project more seriously, as a work with its own message to communicate and not as merely a study for a subsequent work. My friend Gwen said it looked glamorous and world-weary, like Lauren Bacall, and it needed a cigarette. She was right. It needed a cigarette and eventually it got a cigarette.

This is the point at which I decided I was done knitting the faces: 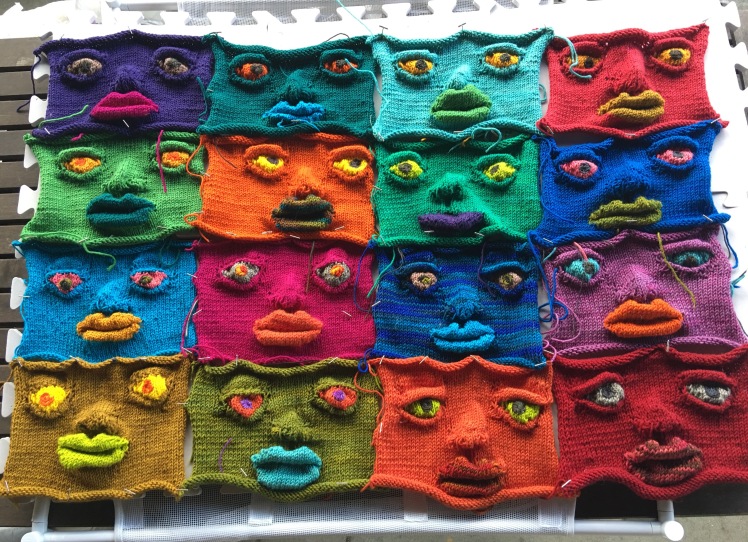 The faces had begun developing social relationships. I mis-centered the orange face at the top right so that it was oriented rightward and gazing upward, so I made it a companion that was mis-centered leftward and gazing a bit to the left, second row down, the pair in the middle. I think of those two as Margaret Ann, the queen bee of 7th grade, and her deputy Kathy. Margaret Ann is delivering her judgment of each of the other faces, and Kathy is confirming Margaret Ann’s verdict. The face at the bottom left, the first one I made, is the baby, innocent of any knowledge of the harms it can encounter in the world and trusting of everyone and everything. The face above it is an adult family member who has experienced the evils of the world and is looking at the baby with fears for its safety. I realized I had disrespected that baby face by embroidering that crazed yellow spiral for its eyes, so I filled in the spirals with some stitches in dark yarn, now that I understood who that face was and what the work meant. It wasn’t, as I’d initially thought, a creepy collection of novelty knitting but a reflection of the nuanced emotions in human faces.

When I had knitted 16 faces, I declared the set complete. I still wasn’t sure I really understood the pattern well enough to do the companion piece, but that was a problem for another day. My current priority was to join the pieces and knit the border. I decided that a black and white double-knit checkerboard was the best way to play up the vivid colors of the faces and to emphasize the rectangular shape of each component piece.

I had been given different advice on how to stuff the features so that they were better defined and more stable, but the advice I followed was to use wool roving because white polyester fill could poke its way through the interstices of the knitting, which is not a good look. It also happened that my local yarn store, a 10-minute walk from my house and a regular haunt of mine, sells bags of natural brown alpaca roving, and I’d rather walk there than drive to a Michael’s or Joanne Fabric any day of any week.

Stuffing the features was a lot harder than I had expected. I had to work from the wrong side to get the rolls of roving into the fabric of the noses, so I was working blind and couldn’t see if I was getting it in straight. Usually I wasn’t. But human features generally aren’t perfectly straight and even, and that’s where our faces get their individuality and expressiveness. It’s the imperfection of faces that makes them human and living. Which was a good thing for the humanness I wanted the faces to take on, since it took me a while to achieve any degree of control over how I handled the roving and attached it to the fabric. Filling the features, especially the eyebrows, added a whole new level of nuance and humanity to the expressions on their faces. Here a lot of the faces look particularly angry or worried because the fabric hasn’t been anchored to a backing and the unstretched fabric is wrinkling and producing folds between the eyebrows that read as different emotions of upset.

It was time to give a cigarette to the face in the bottom row, second from the right. 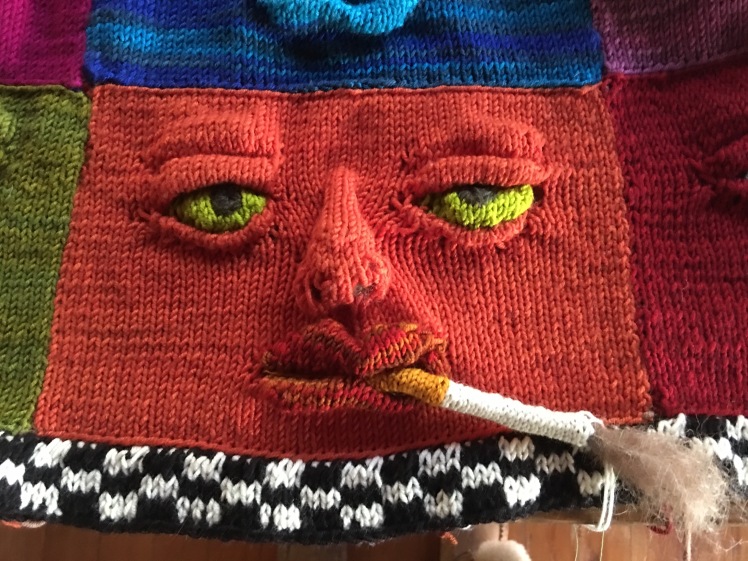 I knitted a tube of white yarn and slightly brownish yellow yarn and joined the two colors together with intarsia, and stuffed it with natural brown alpaca roving. The roving was a good color for smoke. Later on someone gave me some red beads that I sewed on between the white of the cigarette and the smoke. It’s a tiny detail that people enjoy when they notice it.

As for the backing, I deferred to the advice of people with training and experience that I haven’t had, and bought a big panel of foam core at an art supply store. All they showed me was white, so I bought it, and mainly concerned myself with trying to fit it into my car. Melissa, the owner of my local yarn store Lovelyarns, helped me cut the foam core to size and attach the fabric to it, by stitching lots of long strands of yarn into the edge of the border and across the back of the panel to the opposite edge of the work. The stretching of the fabric across the foam core got rid of those anger lines and brought out new emotions of surprise, consternation, and possibly some existential despair. I sat in front of this new version of the wallhanging, looking at nuances that hadn’t been there before. The face in the bottom right corner looks like the actor Bill Murray to me. Melissa started seeing the actor Jeff Goldblum in the blue variegated face just above Lauren Bacall, the face with the cigarette. The eyes of the two faces in the center of the top row were pulled downward into lineaments of sadness, for the dark blue-green one, and fear, for the light aqua one. The red face next to the aqua one looks as if it’s afraid of the same thing.

I sat in front of the faces for an hour, absorbing the unexpected new aspects of their humanity. Then I started seeing all the horrible gaps where the white of the foam core was showing through the fabric, and that became all I could see. I have spent about two hours every day over the past week trying to close those gaps (time I had really wanted to spend working on the companion piece), and now I have come to the realization that the fabric is overstretched and is creating holes where there hadn’t previously been any, and the tension has flattened the filling, which smushes the features, and I can’t let it stay that way. Ugh! I’m recruiting professional help to help solve this. Here it is in its current form. It’s not bad, but it should and can be better. And by “better”, I mean restoring the expressiveness and variability that comes from not stretching and nipping and tucking the personality out of the faces.

All of this reinforces how this knitting pattern serves as a metaphor for DNA and the random, tiny forces that influence the outcome when code becomes corporeal, and then all the environmental factors that shape and change faces as they live their lives. A stitch placed here and rather than a fraction of a millimeter up or down or left or right, or picked up from this angle rather than that angle, or the amount of filling that goes into one eyebrow and the slightly different amount that goes into the other, or the amount of tension that pulls a mouth or an eye in one direction while the other side goes in another direction– all minuscule differences that make a life’s worth of difference in the perception of the social human brain.