I hate personality quizzes, the sort that try to put you in a category and ask you to choose between a and b or a, b, c, or d for your most likely response to a hypothetical situation. My usual response is “it depends,” or “some of the above,” or “none of the above,” or “I wouldn’t be in that situation in the first place.” In knitting, the classic binary question is “are you a process knitter or a product knitter?” That is to say, do you knit for the sake of intangible satisfaction in the process of making things, or for the sake of the tangible satisfaction of completing and using the knitted object? As usual I resist the binary pigeonholing and say, “can I be some of both?” I knit in order to answer some question about color or numbers, generally, which puts me into the intangible side of the tangible/intangible binary. However, I don’t knit just to knit. I have a “Weekly Goals” thread in my Ravelry group, and I post my goals there every week without fail. At the end of the week I can almost always report back with a satisfying DONE for at least one of the goals on the list. Completing and using my knitting is as much of a motivation as the questions I seek to answer.

But I just learned from a recently completed project, without a shadow of a doubt, that whatever I am, I’m most definitely not a pure product knitter.

The project that clarified the not-me was a nice design, one I have admired for a long time, called Forest Weave. It’s knitted sideways in cabling that looks braided, with dropped stitches between each group of cabled stitches. The body is two identical rectangles. It’s an airy summer top knitted in cotton or linen and has a deconstructed elegance and attractive drape. I knew it would look good on me.  On the other hand, it wasn’t going to be an interesting knit, and it had more single-color stockinette than I can ever enjoy, and I don’t really like cabling, and I never knit with anything but wool. But why not spread my horizons? The thing that pushed me into the yes column was that there’s a yarn store a 15-minute walk from my house that has recently been taken over by someone I like. Bless her heart, Melissa always has the notions I need, and there’s usually a lively klatch of knitters at the back of the store, and I began to take my place as a regular at the table. But my several-lifetimes-past-SABLE Wollmeise stash meant I never bought yarn from this store that I want to support (unpaid ad, Lovelyarns, check it out if you’re in Baltimore). So buying yarn for Forest Weave was how I chose to relieve my conscience. I sat down one morning with Melissa, she made me a cup of tea, and we looked at her suppliers’ websites and ordered me some nice linen yarn.

The yarn came, I cast on, and immediately fell in hate with the project. The linen felt like I was knitting thorns. The stitch sequence (twisted stockinette stitch, plain stockinette stitches, another twisted stockinette stitch, and a purl stitch) was hurting my left wrist. I asked my Ravelry group for therapeutic remedies. Then I asked them for suggestions on how to persist with this project that was boring me to death as well as hurting my left wrist. The reply was: “Abby, you don’t sound like yourself. Your wrist is trying to tell you something. Quit this project.” That stopped me short. Why indeed was I knitting this thing? But there was an answer. It was because I had made the emotional investment of intentionally buying yarn that wasn’t Wollmeise. And because I wanted to wear this top. That was the moment when I temporarily changed my nature and for several weeks became a pure product knitter.

I adjusted my way of knitting so that my wrist stopped hurting, and I got used to the feel of the linen. I even got used to the mindless knitting, thanks to the fact that we did a lot of traveling while I was working on this project. The brainless knitting lent itself to planes, trains, and automobiles, and to sitting on the deck in the midnight sun of Norway while I was hanging out with my knitting friends during our recent long weekend a week after summer solstice at a ski lodge in Hafjell. I did have trouble with the instructions, which was a bit irksome because it was a simple design and shouldn’t have been hard to understand. The designer provided only verbal instructions, some of which confused me because those lines of text seemed unnecessary. I wish the designer had graphed the pattern in a chart as well as written it in words and abbreviations, so that I could have immediately understood it visually instead of verbally. But I am not criticizing the designer. The numbers were right and the instructions were lucid, if I could have made myself sit down and made myself think them through. I had a bit of an attitude problem toward this project, not having perfectly completed my personality transformation from process knitter to product knitter, and I don’t hold the designer responsible for my failings.

For the 3 1/2 weeks it took me to to complete this project, once I got serious about working on it, I felt like a process knitter in a product knitter’s body. I measured success in inches, not in problems solved or effects created. Pleasure in the process came in how little I noticed what I was doing as I knitted in a mode of transportation en route to some destination far north of my home base, or when I noticed how much more I’d gotten done after knitting and chatting in a group of chattery knitters. It felt like Freaky Friday. When I’m myself and knitting in my own body, I’m a solitary knitter and I notice everything I do. Now my problem-solving was deployed in the service of correcting my deviations from someone else’s instructions. After accepting that I was only knitting for a material reward at the end, it wasn’t unpleasant. It’s the way a lot of people knit, and they wear beautiful knitted objects as a result. But I wonder if it might have had a bad aftereffect on me, because I’m having trouble getting back into a long-delayed project in which I make up stranded patterning right there on the needles. Did banning my brain from interfering with my hands for 3 1/2 weeks weaken something in me that I think of as a gift?

I know people who are such pure process knitters that completing a usable finished object is completely beside the point, which is to experiment and push the limits of their ideas. There are people who knit for money or to possess a particular garment or for the love of the people in their lives who are the recipients of their work, and the point is the material or emotional payoff at the end. Those are the two extremes, and most knitters operate somewhere along the continuum, including the purest of product knitters, unless they do piece work for money. Then it’s just a job. As for product knitters who knit recreationally, they take as much pleasure in their process as process knitters do, for the soothing repetitiveness of their busy hands and the way busy hands quiet busy minds. They take pleasure in the speed and efficiency of their knitting, and in how quickly they understand pattern instructions, and in the number of finished objects they complete. Mastering new techniques is a source of pleasure for both kinds of knitters.

People do love their binaries, to determine whether they are this or that, even though– or maybe because– they are aware of the many stops along the route between this and that. When I spoke in the first paragraph of tangible satisfaction as opposed to intangible satisfaction, I think I defined the factor that divides knitters into the two categories. If I were presenting the binary in the language of a women’s magazine personality test, the question would be like this:

When you see a sweater pattern you know you’re going to knit, your gut reaction to it is:

a. I really want to wear this sweater!

b. I really want to learn that technique!

Response “a” indicates that tangible satisfaction is the motivator, response “b” indicates that intangible satisfaction is the motivator. For a little while I was thinking about how I sought to lose awareness of what my hands were doing while I was in my Freaky Friday product knitter mode, and I was looking at whether I could generalize that as a distinguishing trait of product knitters, before I realized how silly that generalization would be. I can’t take my coping mechanism as a template for everyone. I might play a product knitter on TV, but that doesn’t make me a product knitter, and a personalized sampling of one (myself) doesn’t work as a scientific study. A process knitter can enjoy the sedative power of repetitive motions as much as someone who is power-knitting his/her way toward a finished object, because the point of the knitting for the process knitter is sedation, not the finished object. A product knitter can be as attracted to an interesting construction method as a process knitter, but the reason for the project is the final product, not the exposure to a new technique. And of course the product knitter/process knitter question isn’t a black or white dichotomy. It’s not even a shades of gray thing. Speaking as a person who has played with color gradients a lot, there are many ways to get from black to white that don’t even involve shades of gray.

So after  3 1/2 weeks of knitting this project that was out of character for me in just about every way, I finished it, washed it, and let it stretch out to its intended dimensions. And it was perfect. It looks about as good on me as anything is going to look and I have hardly taken it off since I finished it 10 days ago. It looks so good that I am afraid I’m going to forget that making it went completely against the grain and that I might be tempted to knit some other project that starves and suffocates the process knitter part of me, in order to have something cute to wear. 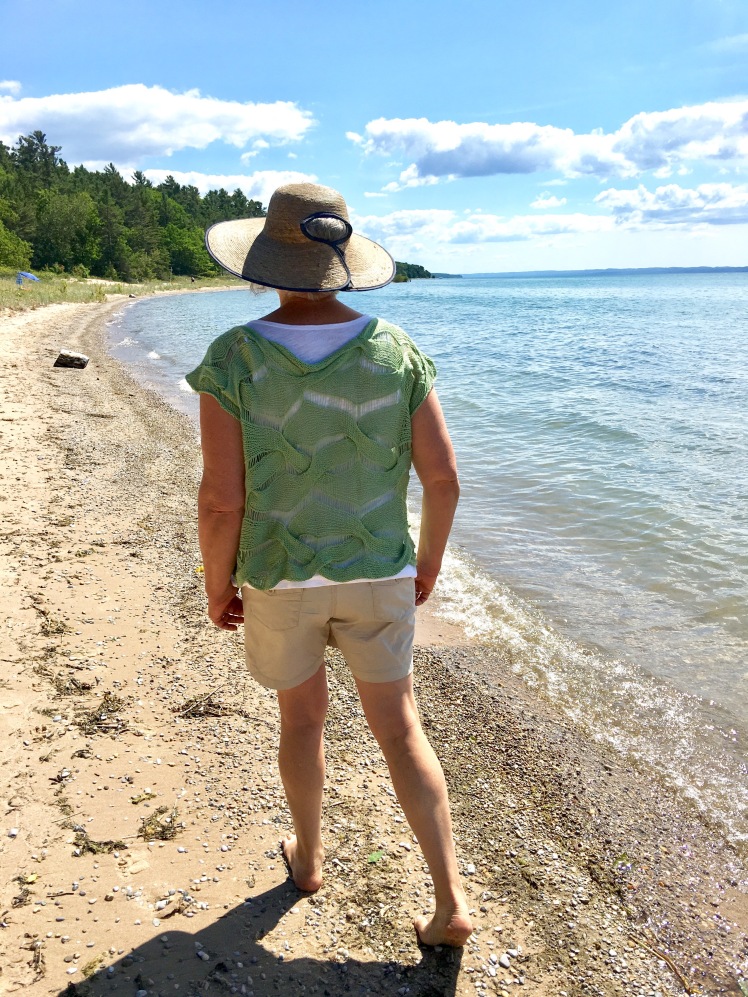 6 thoughts on “Product vs. Process”