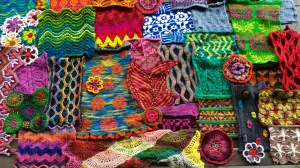 I resisted crochet for a long time. I was Team Knitting all the way, and crochet looked clumsy and frumpy to me. A friend taught me the basics during my first knitting era, but knitting was a lot more interesting and appealing, so my friend’s efforts to teach me went in one ear and out the other. My attitude started to change when I saw revelatory crocheted works of art on Ravelry, especially by Russian crocheters, and I put crochet on my “someday” list. “Someday” came in January, when I retired and dedicated the month to learning new techniques, one of which was crochet, and now I love it. 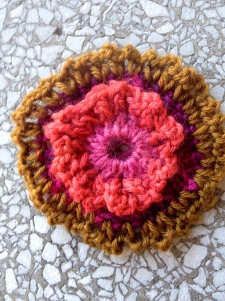 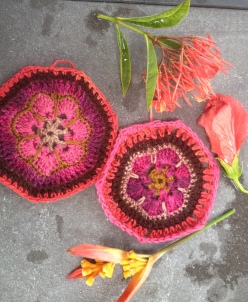 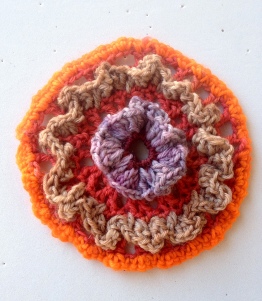 Now crochet is my new toy. It saved the neck of my latest sweater, so to speak, as well as literally. I was following the instructions in Barbara Walker’s Knitting from the Top to make a round-yoke, top-down cardigan, and I hate to say this about one of my knitting heroes, but Barbara’s instructions produced a bad, lumpy neckline. 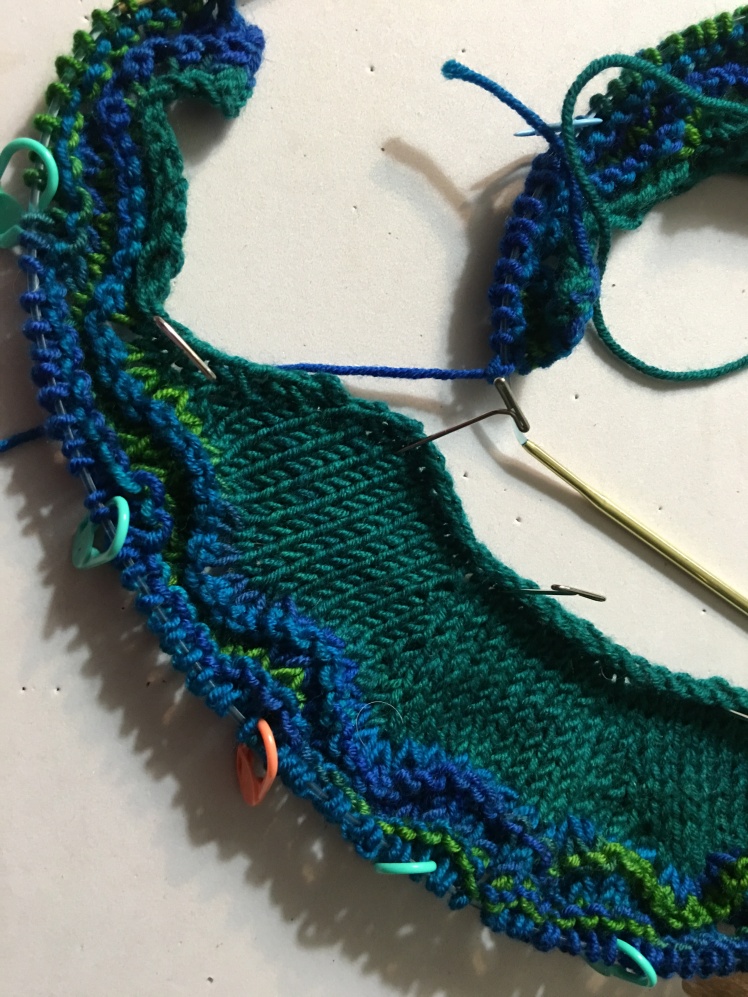 I was was able to mitigate the worst of the lumpiness by tacking down a bit of the stocking stitch edge that wanted to roll anyway. 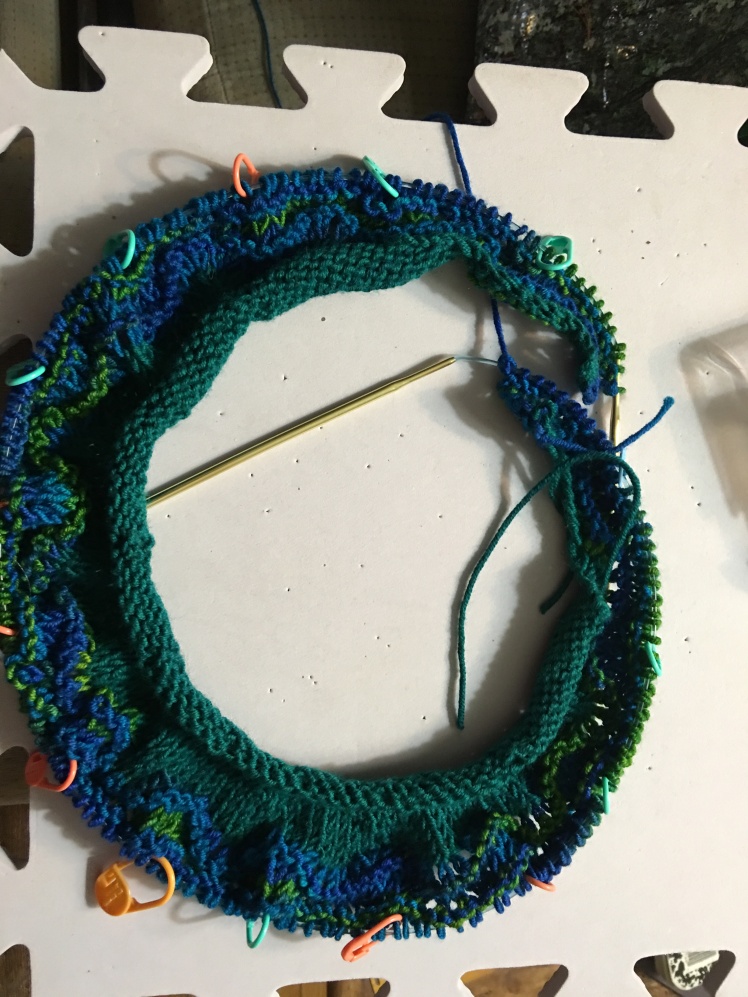 But there was still some some disturbing  wonkiness right at the throat where the feather-and-fan stitch began. 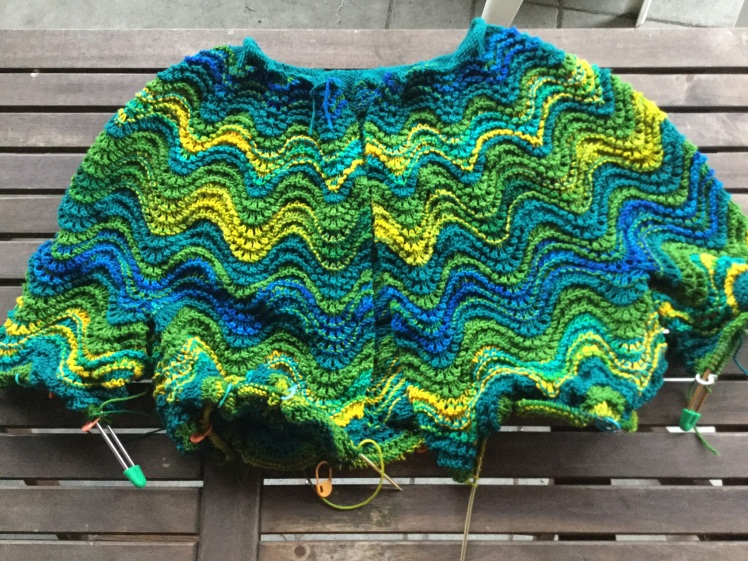 Crochet to the rescue! How about a crocheted scallop edging in a matching lace multi?  Here’s the multi as it appeared on the skein. 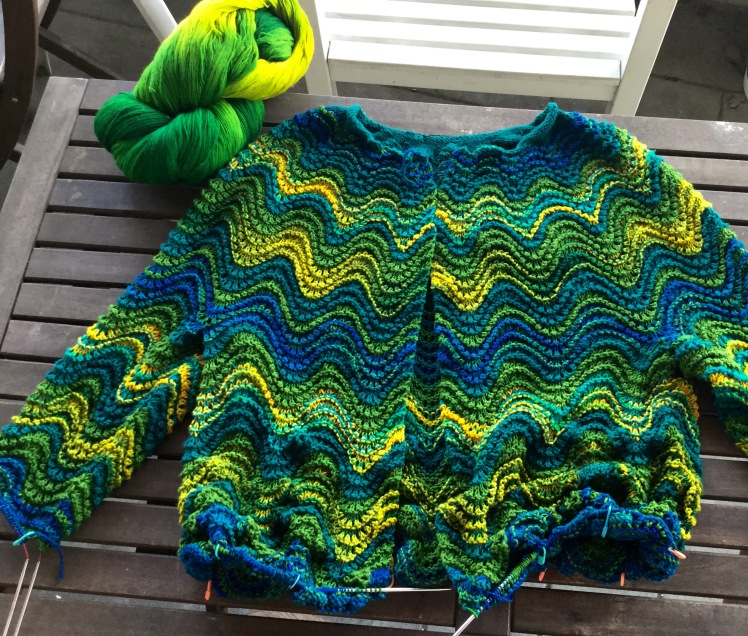 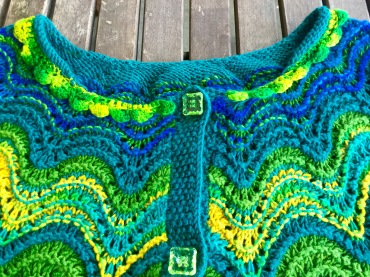 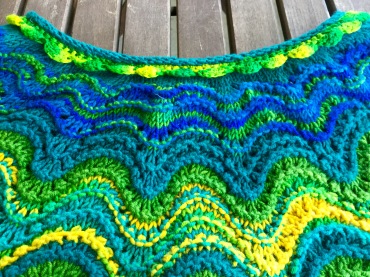 One of the many things I love about this edging is the way the shape of the crochet stitches groups the colors of the multis sequentially, like a miniature version version of the skein, rather than striating the colors as knitting tends to do.

Here’s the finished sweater/coat with the dress that inspired it: 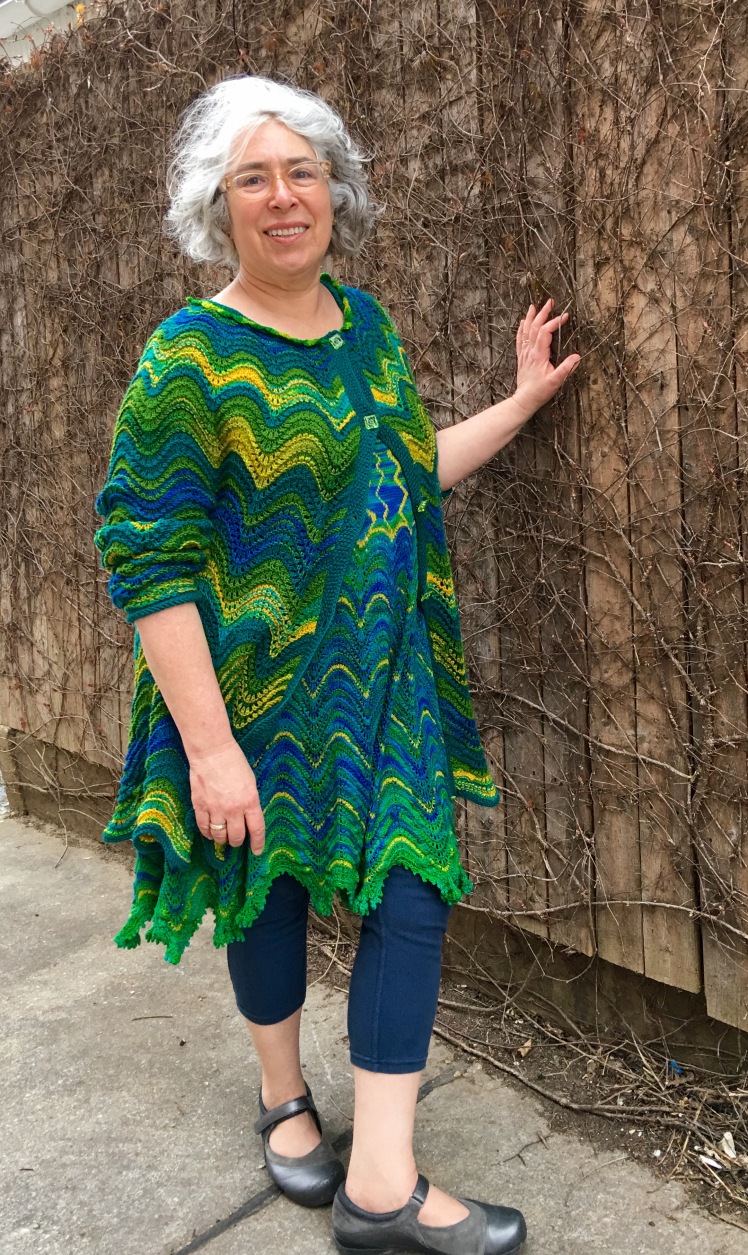 I got kind of bored knitting this sweater, since I had knitted the dress not all that long ago and spent 10 solid weeks on it. I usually avoid having more than one project in the works, but I succumbed to the temptation to work on something more interesting while doing the less inspiring project, so I embarked on a crocheted baby jacket using an African Flowers motif that I found online. This is the first garment I’ve ever made. In fact, it’s the first crocheting I’ve ever done that wasn’t a swatch. I have just assembled the first half of the jacket. It still looks pretty rough because it hasn’t been blocked yet. Also because my crochet skills are still pretty rough. Here are the two sides of the first half: 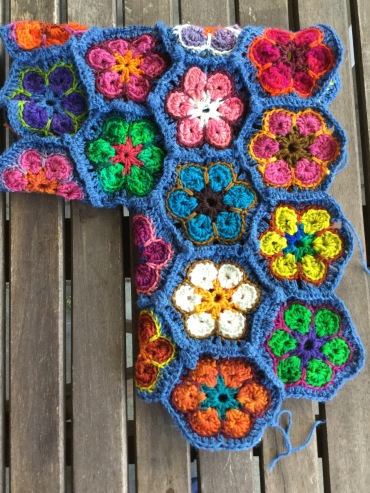 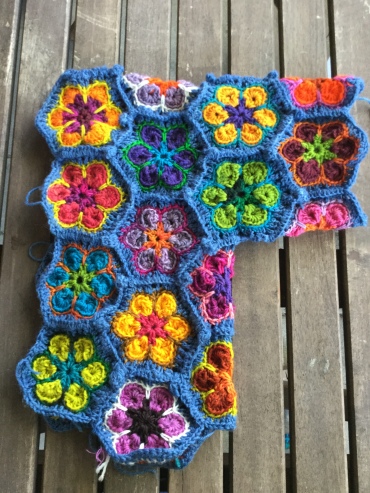 All these colors look different post-assembly from the way they appeared when I was putting three colors together for the flower motifs, and then added the blue border. Generally the blue border spoiled the look of the flower colors when they were isolated from each other, but now that they are attached, the blue provides cohesion and organization to the array of colors and enables them to interact and play off each other across the totality of the piece. The color play has a lot in common with my Kaffe-Turkish Fusion socks. 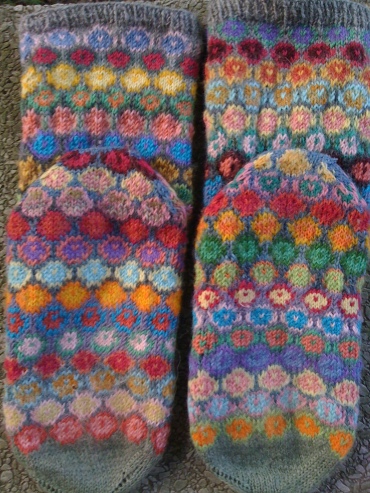 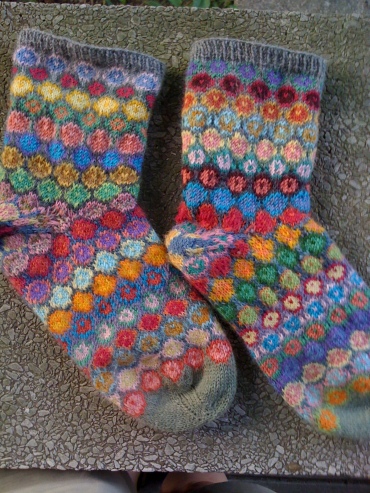 People love the colors in these socks. I don’t get it. 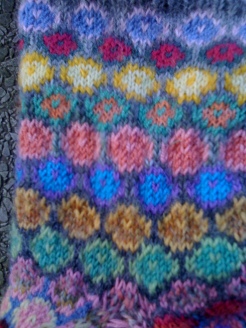 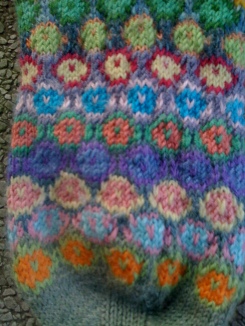 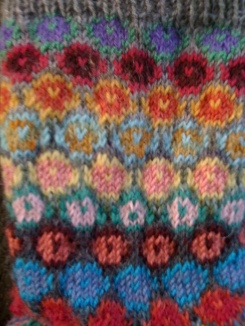 I wrote some comments on color usage in my Ravelry project notes that I’ll copy here:

I think that I ought to add a caveat to that last sentence, which seems to promise genius results from the random addition of infinite colors. This isn’t a case of monkeys typing forever and eventually spewing out Hamlet. There needs to be some kind of logic and cohesion holding the colors together, while also leaving room for variation and surprise. A friend of mine on Ravelry describes the tension that produces great color work as “colors that both cooperate and fight with each other.”

6 thoughts on “Crochet to Abby: Resistance Is Futile”